in the area of Fontainebleau, France Maintained by Team SansMaison

Against common knowledge, this area is actually pretty huge.

There are more than 500 problems littered around the forest. The boulders are close to each other, they are spread out and they "turn" weirdly. Meaning that it's very easy to get lost and confused where you are and where you are going.

Many times it's easiest to look where the target boulders are, take a compass direction eg. NW and walk there.

There are 8 different circuits. The Kids white circuit is very faded. Instead try climbing the yellow circuit problems which suit you. The yellow and orange circuits are nice for a relaxed outing.

There are two blue circuits, Blue D and Sky Blue D+. So don't get confused with the repeating blue boulders =) The red is ED-, so it's going to be hard as nails. And if you feel really strong, why not climb the white circuit? The black circuit is a little bit hidden and the boulders are lichened and hard to find...

What would you climb...

Les Calins de Kim, 7A
Levitation 7A (which in my opinion is a bit overrated)
Chasseur de Prises 7A is an amazing piece of bouldering.
Les Grimpeurs se Cachent pour Médire, 7A
Le Theorie du Chaos, 7B
Delivrance (Marquis de Sade), 7A+
La Mare Droite, 7B
Jour de Pluie 7A and 7B variations.

And there are some really good slab climbs on the blue circuit. 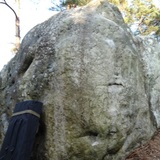 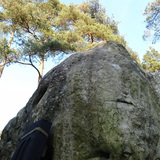 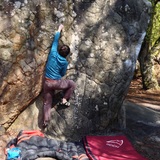 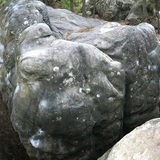 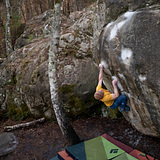 P. Melgin
from Laukaa
See all members
Other Premium topos by Team SansMaison 33