in the area of El Chorro, Spain Maintained by El Chorro Bolting 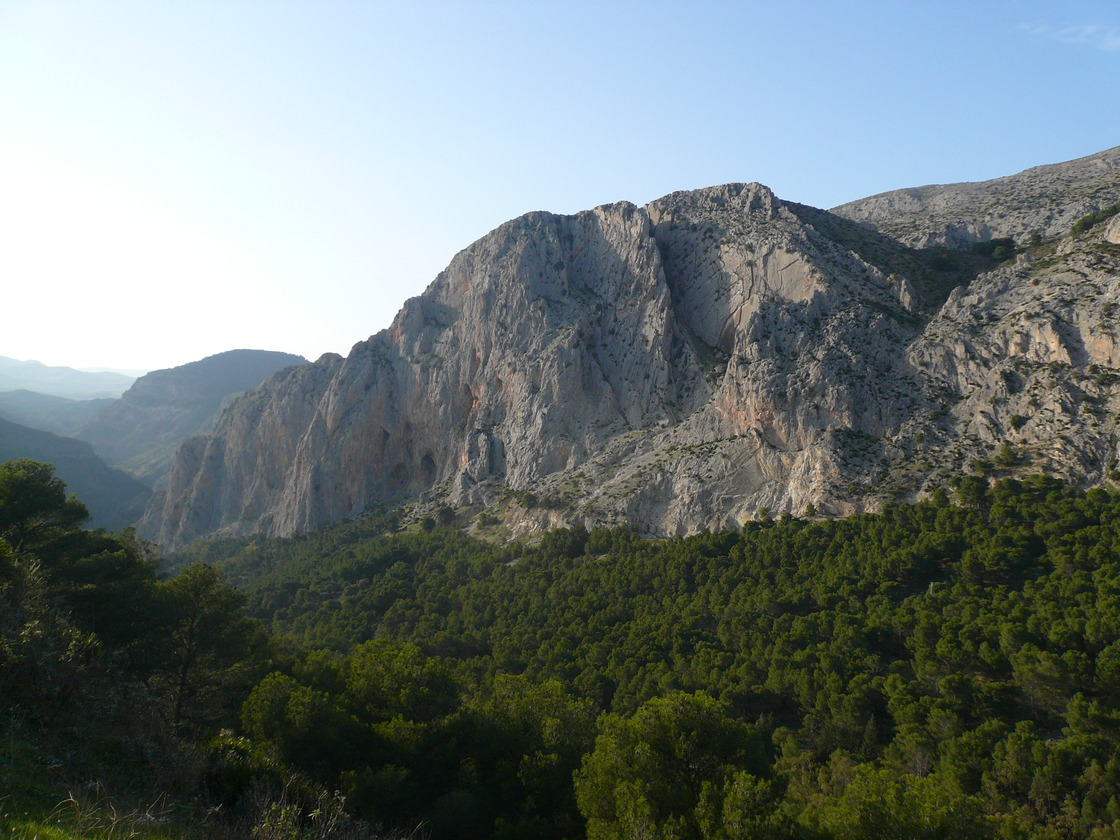 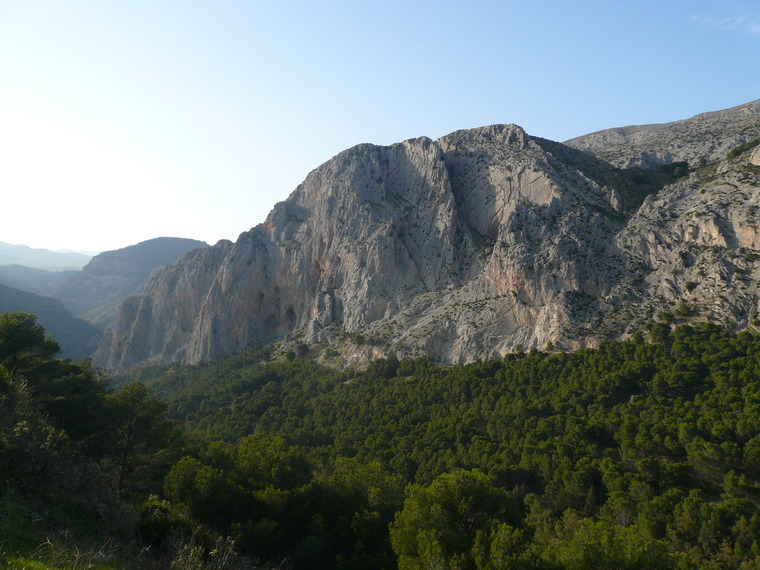 The Frontales is the prominent wide rock face right in front of the El Chorro town, quickly accessible by foot.

🧗‍♀️ Frontales provides a wide variety of climbing styles, including sport climbing on 30 to 50 meter overhanging tufa roofs, short delicate slabs and long vertical pump fests. There are more than two hundred single pitch lines, in addition to the main attraction: multi-pitch climbing, both bolted and trad. In regards to sport multi-pitch, there's everything from easy though amazing entry level routes in grade 5+, sustained mid-sevens to even a 9-pitch 8b. In the trad genre there are a lot of less traveled El Chorro original adventure routes starding from grade 4+. Many of these routes are more or less forgotten and without bolted belays, but offer the original old-school adventure style, like the first route opened in El Chorro, "Via de las Cabras" 5+ in sector Suizo.

🧭 The Frontales mainly faces South or South West so it's at its best outside of summer months and on cloudy days. A few sectors might offer shade or shelter from rain. 🌧 All faces dry quickly after rain.

⛑️ It is advisable to wear a helmet due to potential rockfall from multi-pitch lines and ibex 🐐.

👶 Those with children should consider that the approach to all sectors except for Castrojo and Los Albercones requires a few moves of scrambling.

Find more information below sector by sector, from west to east ➡️:

2 - Castrojo ☀️
A sunny easy-access crag with single-pitch easy to intermediate grade climbs, with a few classic sevens.
📊 Grades 4+ to 7b

3 - Los Albercones
An easy-access single-pitch crag with vertical or slabby easy climbs, a few long multi-pitches and a via ferrata.
🅿️ Parking right in front. (⚠️ Note that the road is in bad shape). The trees in front provide shade.
📊 Best grades: 5+ to 7a
🚫 Note: the sector used to extend to the roof of the railway, but climbing on these old routes is banned, and these routes have not been included in this guide. Climbing the multi-pitch routes on the higher walls is allowed.

4 - Amptrax ☀️
A multi-pitch sector named after the absolute classic multi-pitch "Amptrax" 6a+. The 200 meter wall has had many new stellar multi-pitch climbs bolted in the 2010s including "Ebola" 6b, "Apocalipsis" 6c, "Corazon que no siente" 6c+ and "Mar de Fuego" 7a.
Access: Scramble up to two large ledges or bays: left-side bay for "Amptrax" and "Ebola", the right side bay for "Apocalipsis" and "Mar de Fuego". The right side bay is accessed more easily from sector Suizo.
Descent: 1) Rappel down the route, 2) rappel down "Ebola" 6b that was originally only an abseil line, or 3) walk down the other side of the cliff. 🗺 See map for the GPS trail, as the path might not be that obvious.
⛑️ It is advisable to wear a helmet especially on this sector due to potential rockfall from other climbing parties.

5 - Suizo
☂️ A sector that faces west, so this one is in the shade until afternoon, after which it gets lots of sun. ☔️ The overhanging part stays dry in the rain. Some popular overhanging classics and great long vertical climbs. 🧼 The classics might be well polished but still awesomne climbing.

8 - Poema de Roca 🧗☔️
A cave/roof sector with the best hard climbing in Frontales.
The profile is overhanging and roof. A lot of great one-pitch routes and extensions on good holds and tufas that stay dry in the rain.
Hardest multi-pitch climbs in El Chorro.
☂️ Shade in the afternoon
☔️ dry in the rain
📊 Best grades: 7a-8b

9 - Solarium ☀️
A sector that lives up to its name - can get very hot on a sunny day. Many new intermediate and hard routes have been bolted recently. Main attraction: ⭐️⭐️⭐️ "Estrella Polar" 6b multi-pitch. ⛑️ It is advisable to wear a helmet especially in this sector due to potential rockfall from the multi-pitch lines.

10 - Austria ☀️
📊 Grades: 4+-7a+
Home to some of the easy-access multi-pitch climbs from the easier end.
Main attraction: ⭐️⭐️ "Valentines day" 6a multi-pitch. ⛑️ It is advisable to wear a helmet due to potential rockfall from multi-pitch lines.

13 - Tango ☀️
The sector Tango is hot, have no shade and face the south. Rusty anchors replaced in 2022. On the Frontales Medias, to the right of Las Placas de la Cantera.

14 - Sin Futuro ☀️
An old and less popular sector on a narrow ledge for belaying. The sector Sin Futuro is hot, have no shade and face the south. Rusty anchors replaced in 2022. On the Frontales Medias, to the right of Las Placas de la Cantera.
Not suitable for kids.

The first routes in El Chorro were opened in 1972 in Frontales: the "Via de las Cabras" 5 in sector Suizo. The old school El Chorro style has been an adventure trad style on long routes, opened from ground up. This style can be seen in many multi-pitch routes, both trad and bolted. Many of the trad routes include the odd bolt. New sport routes are more generously bolted than back in the day. Some sectors have been more popular in the early times, but have been forgotten, but hopefully see a renaissance with the assistance of rebolting and guidebooks with new pictures. These sectors haven't been fully inclded in this topo (yet): "Cañada", "Esperanza Para Salas", "Safari", "Bridwell", "El Olimpo", "Tango" and "Sin Futuro".

The most recent route additions in Frontales are the harder sport lines in Solarium bolted by Jose Mancera in 2020 and 2021. In the 2010s, Bernabe Fernandez has bolted many of the greatest multi-pitch lines in El Chorro, probably all of them deserving 3 out of 3 stars: "Ébola" 6b+, "Apocalipsis" 6c, "Corazón que no siente" 6c+, "Mar de Fuego" 7a, "Lluvia de Asteroides" 5+, "Mal de Ojo" 7a and "Estrella Polar" 6b+. More on the routes opened by Bernabe Fernandez: https://bernabefernandez.com/el-chorro/.

Various parties have kept the old El Chorro adventure spirit alive by opening new daring and adventurous traditional multi-pitch lines, opened from ground up. More on the El Chorro trad adventure exploits and counts of many first ascents with hand-drawn original topos in the blog of Pedro Soto-Guerrero: https://sotoclimb.blogspot.com/search?q=el+chorro. 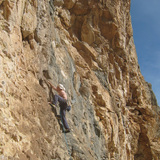 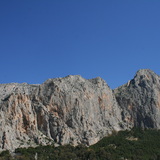 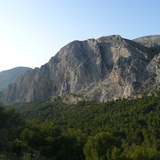 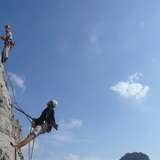 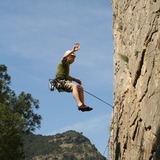 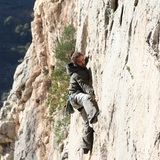 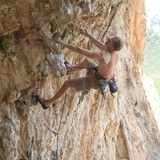 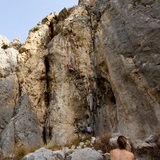 🚗 Parking: 1) At the reservoir below El Chorro town, 2) sector Albercones (road in bad condition) and 3) at Las Encantadas crag. Parking on the side of the roads in the nature park is not allowed where prohibited with signs.

🚶 All sectors are accessible by foot via the road that weaves through the nature park and a path that leads from sector Castrojo all the way to sector Placas de la Cantera, in front of the cliff.

⛰ The crag is situated in a nature park.

General rules:
🦅 Respect the nature
🏞 Follow the established paths
⛔️ Please don't park your car in the nature park
🚯 Take all rubbish with you including papers
🔥 Don't light fires